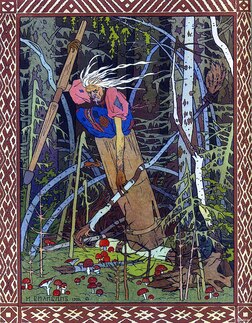 Baba Yaga illustration by Ivan Bilibin
Activity: Who is the scariest character you can think of? What do they look like? Where do they live? Do they live close to others or isolated from everyone else? Think of their house. Is it scary too, or magical? Are scary characters powerful? Do you think they are lonely or misunderstood? Do you think they are happy? If you imagine them as old or older, is there any connection between their power and loneliness and their age? Is there a chance they can be your friend? That they have anything to offer besides fear?

Baba Yaga is a fearsome witch character found in Slavic folk and fairy tales. One of the most famous is the Russian fairy tale “Vasilisa the Beautiful” collected by Aleksandr Afanas’ev in the 1850s. The Vasilisa story has many elements similar to the Cinderella tale—a dead mother and hapless father, a mean stepmother and stepsisters, a marginalized role for the heroine performing more than her share of chores. However, the Vasilisa tale also includes a magical doll given to the heroine by her mother--and the character of Baba Yaga.

Vasilisa meets Baba Yaga after being put to a task by her stepmother that requires entering the forest and finding Baba Yaga’s house. On the way Vasilisa encounters three horsemen and horses, one white, one red, and one black, symbolizing the day, the sun, and the night. Baba Yaga’s house is described as a wooden hut resting on chicken legs with a skull and bone fence. Baba Yaga has a mortar that she flies around in using a pestle to steer. Baba Yaga also gives Vasilisa a series of impossible tasks, such as sorting poppyseeds out of a bin of dust, or she will eat Vasilisa up. Vasilisa’s doll helps her complete the tasks.

Vasilisa is eventually banished from Baba Yaga’s house when the witch hears that the girl has received a blessing from her mother. Blessings are apparently a line in the sand for the old woman. The story resolves after Vasilia returns home by the light of a skull torch, which burns her stepfamily to ashes and results in Vasilisa becoming a spinner and weaver (again, with her doll’s help) and catching the eye and hand in marriage of a tsar with her fine handiwork.

In modern media Baba Yaga has shown up in everything from video games to the Hollywood action flick series John Wick, in which “Baba Yaga” is the alias of the title character played by Keanu Reeves (there is some debate about the pronunciation of this alias and the Baba Yaga connection). Recent variants of the Vasilisa tale as well as stories focusing exclusively on Baba Yaga have explored new characterizations of the old witch in the woods, portraying her as a misunderstood would-be grandmother or a wise woman/advice columnist or even as the victim of a villainized Vasilisa. Some keep close to the classic versions and characterizations and revel in the terrifying visual elements of her house and appearance. (A Baba Yaga scene in Hellboy from 2019 is especially horrifying.) Interestingly, at least one recent horror movie featuring Baba Yaga portrays her as a much younger woman.

Some new representations of Baba Yage prefer to keep her the way she is: old, fearsome, and powerful, if also weary. In the collection of speculative fiction, Burning Girls (2021), by Veronica Schanoes, a story about the Russian-born anarchist Emma Goldman sees her meet up with Baba Yaga, who regards the aging yet still radical Goldman as a worthy successor to Baba’s long reign of inspiring both fear and respect.

Below are some videos offering a cartoon variant of the Baba Yaga/Vasilisa story and background about her myth. The annotated bibliography page includes detailed information about some recent Baba Yaga stories.